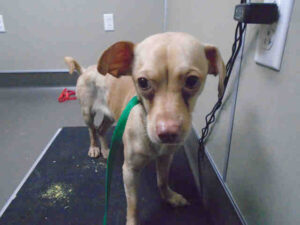 Zippy came to PHS/SPCA with pup siblings. All were very fearful and under socialized. During their health check, veterinary staff found that they all were covered in fleas and diagnosed with a GI parasite. Which we treated with flea medication and antibiotics. Additionally, Zippy was very underweight. Once we had their medical needs in order, the real challenge was to gain their trust and help them acclimate to being​ in a new place with many new people. 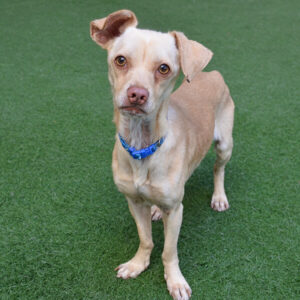 Out of all the pups, Zippy was the most unsure about all these new and scary experiences. When staff members walked by his kennel or went in to try and pet him, he would scrunch himself against the back wall of the kennel, making himself as small as possible. Eventually, Zippy cautiously allowed a staff member to pet him. When he started accepting minimal contact from people, staff were able to get a leash on him to walk him to play groups. Zippy was gentle and shy, but it was clear right away that he wanted to bond with people. 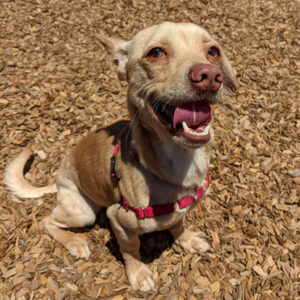 Zippy loved to go to playgroups with other small dogs, especially when he had the chance to run around with his pup siblings. Not only did the playgroups provide social time with other dogs, but Zippy’s more outgoing pup siblings started to show him that people were fun to hang out with too!

One day, after a few weeks of regular walks and play groups in the yard with all his pup siblings, he made the first move to interact with a staff member. After a walk, Zippy and the staff member went to the yard for some time off leash. Much to the staff member’s surprise, Zippy came over to him for pets. This was the first time Zippy looked to someone for attention and love. At this moment we knew that if given plenty of TLC and time, Zippy would continue to slowly come out of his shell and eventually find his new home. He still had a long way to go, but he was on the right path.

Zippy needed much more time, attention, and love before he would be ready to become available for adoption. Our behavior department identified him as a good candidate for our Transitioning Animals Into Loving Situations (TAILS) program with the Sheriff’s Office. In this program, shelter dogs are given around-the-clock care, training and nurturing from minimum-security inmates for eight weeks. During his time in TAILS, Zippy received exercise, socialization, grooming, housetraining, and basic obedience training. After graduating from the TAILS program, Zippy became available for adoption. 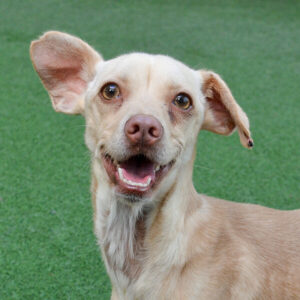 When Zippy arrived at our Burlingame adoption shelter, he initially reverted to freezing when he saw people and hiding in a corner. He was not interested in treats or toys, so it took him a few weeks to settle into being somewhere new. He eventually began to thaw and greet staff and volunteers.

During this time, he gained a small fan club of dedicated volunteers who helped him regain the confidence he built in the TAILS Program. A dog volunteer who worked with Zippy before he went to the TAILS Program and after he graduated said, “The confidence that he gained through the program was remarkable – he could make eye contact, he could sit on cue, he could walk comfortably on leash, and he could come when called.  He was still timid with new people, but he now had the skill set to connect!” ~ Kerstyn, Dog Volunteer

Zippy became accustomed to the leash and enjoyed long walks. He had the opportunity to go on a few long hikes with volunteers and loved the time outdoors! The volunteers said he was a great hiking buddy who never reacted to people, bicycles, kids, or other dogs. Zippy’s personality began to truly shine when he was outdoors and exploring (on leash of course!). He may be a little dog, but he had no trouble keeping up with the pack! 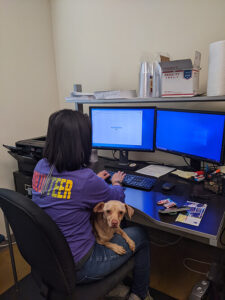 Office visit with a volunteer

Zippy kept staff and volunteers company during office visits. These visits gave Zippy a chance to be in new environments with people he was already comfortable with. It was important to help Zippy learn that being in a new place didn’t have to be scary.

When Zippy saw members of his volunteer fan club passing his dorm room, he would get very excited and hopeful that it would be his turn for a walk.

After eight months at PHS/SPCA, Zippy was not only affectionate with his regular visitors from his fan club of volunteers and staff, but he also began to warm up to strangers. He no longer shied away when meeting a new person.

One of Zippy’s favorite volunteers told us, “Having the pleasure of watching Zippy’s behavior evolve and blossom over time is the most rewarding volunteer experience. It’s absolutely priceless!” ~ Lisa, Dog Volunteer

After 271 days, Zippy’s wait was over. It was not an easy road, but with help from our staff, volunteers, and the TAILS program, Zippy found his forever family.

Zippy is doing great in his new home! His family tells us that when they first brought him home, he was afraid and would run away from them, but every week he gets more comfortable and opens up a little more. With each passing day and week, his personality continues to shine through his initial shyness. He’s a sweet, affectionate little guy. Zippy loves to go for walks and to the park and now comes running when his dog dad calls him. When he gets excited he spins around in a circle and looks like a furry ring. His favorite thing to do is lie on the couch next to his dog dad and receive belly rubs.

They have been learning to communicate well with each other. “I’m learning his “I have to go to the bathroom” look, and his “I’m hungry” look. His “I want attention” signs are a lot more obvious.” Zippy is very well behaved – he doesn’t chew things up, make messes, or get into the trash.

“He is truly becoming a great companion. We thank the Peninsula Humane Society & SPCA for bringing us together!”