’Twas the night before Christmas, and all through the house
All the creatures were stirring, including the mouse
And the dogs, the bunnies, the turtles and cats
Awaiting the Big Guy (you know: white beard and a sack)

They nibbled the cookies, set out with great care
Careful to avoid getting milk in their hair
Then they stretched on the carpet, and lounged on the couch,
“He’s late,” they complained, “that lazy old slouch!”

They had a proposal they wanted to place
To Mr. Claus, direct to his face.
But as the night lingered, sleep was their escape
Except for one kitten climbing the drapes.

She’d napped most the day and was now fully alert
(‘Though covered with schmutz, some dark chimney dirt).
She finally saw him, black boots from the flue
White beard, big tummy: jolly you-know-old-who.

He ho-ho’d quite gently, asked had she been good.
“Skip the pleasantries,” she responded, “if we just could.
We’ve something to ask, a bit of a favor:
A change to your flight plans, one we hope you might savor.

“Instead of the trinkets, bright baubles and toys,
Deliver us, dear Santa, to good girls and boys.
There are millions of us homeless, in shelters we sit.
Use Christmas magic. In your red sack we’ll fit.”

Santa was touched by this most wondrous plan
But some things, he knew, were out of his hands:
For the answer to the crisis in pet homelessness
Requires a change in human consciousness.

So he and that kitten now face us and plead:
Please value these lives, it’s the coming year’s need.
Respect them and love them, treat them like treasure
They’ll return those sweet gifts many times beyond measure.

And in some Christmas future, a true holiday
Every companion animal has a person for play,
And to love them, yes, and to honestly care:
Then true Christmas for all, for all a family to share. 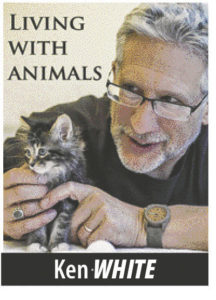